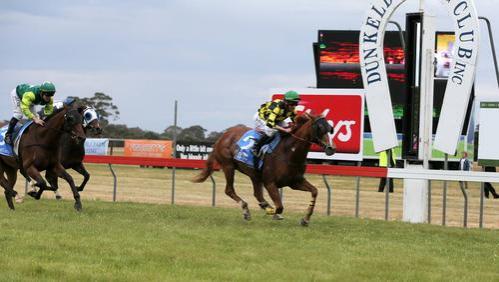 VETERAN comeback galloper Diamonds At Noon earned a possible trip to Tasmania for feature races in the new year after he scored a gallant win in the $25,000 Dunkeld Cup on Saturday.

Having his third start in the 1800-metre race, Diamonds At Noon, aided by a brilliant ride from Steven Vella, defeated Orientaped and Henshaw.

His win for Colac trainer Bill Cerchi followed his fourth placings in 2012 and 2013.

A delighted Cerchi said the eight-year-old deserved the win.

“Diamonds At Noon has been plagued with various injuries during his career.

“I had thought of running him in the Donald Cup on Sunday.

“I have not be able to give Diamonds At Noon any trials or track gallops.

“He had a virus for a few weeks and then injured his near side back hock which put me behind again. He’s a tough old horse who was having his first run for three months.” Diamonds At Noon was last at the 450-metre mark before Vella hugged the rail on the consistent galloper, only going around Henshaw to win the race.

“It was an amazing ride by Steven. I reckon he’s ridden nearly 100 winners for me over 20 years but that ride has to rate as one of his best,” Cerchi said.

“Steven never panics. He’s a very underrated jockey. I would say that’s how he’s been all his career.

“He just goes about his job and that is to ride winners. He hates getting beaten.”

Cerchi feared Diamonds At Noon’s career was over after he ran an unlucky second in the Penshurst Cup last year.

“He injured ligaments in his near side pastern on his front leg in the Penshurst Cup,” he said.

“He should have won the race. I took him to the vets and they said he would never race again. I took him back home and nursed him back to good health.

“He’s been a good horse, very underrated. I wish I had a stable full of horses like him.”

The former Coleraine trainer said the cup win would weight Diamonds At Noon out of next month’s Penshurst Cup but his focus would now centre on races in Tasmania.

“I would say I’ll be looking at races like the Launceston and Hobart cups in February,” Cerchi said.

“He’ll get light weights in those types of races.

“I’ve just got to do a bit of planning on working out leadup races to get him ready for the cups. I’ll probably end up taking about four or five horses over to Tassie for its summer carnival.”

Diamonds At Noon took his record to nine wins and 15 minor placings for $215,000 prizemoney with his Dunkeld win.