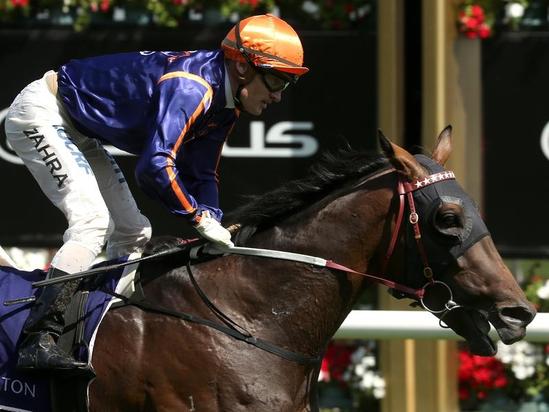 Declares War might have only won a Benchmark 70 at Flemington on Saturday but trainer Darren Weir couldn't help but think of what next year may hold after the three-year-old staged another remarkable finish to notch a hat-trick of wins.

At just his fifth race start, Declares War again looked out of contention as he had at The Valley earlier this month and before that at Sandown Lakeside, but as he did at both those city tracks, he unleashed a sizzling late run to win the VRC Schools Program Trophy.

"I'm not really sure what to do with him now, but there's one thing I know, he's a beauty going forward," Weir said.

"He's taking the steps that you need a horse to take and obviously not getting it easy either as he's had to get himself out of trouble."

Ridden by Mark Zahra and starting the $3.20 favourite, Declares War settled nicely midfield but there were not runs for the horse as the field turned for home.

But just as the mare Naivasha ($16) stormed to the lead over Five Kingdom ($5.50), Declares War picked up and burst through a gap to score by a length.

"I was concerned about him racing inside horses but he went through that gap today so going forward, that's a big positive," Weir said.

"No fault of Mark, but he got himself in an awkward position, but has managed to get himself out of it so it's good signs going forward."

Races like the Group 1 Australian Guineas or even the $5 million All-Star Mile at Flemington in March are worthy of consideration according to Weir.

"Whether we back off or keep going we'll have to give it a bit of thought," he said.

"He'll run 2000 (metres) no worries so do you take him out to that or go back to a mile? My gut feeling is the longer the better for him."