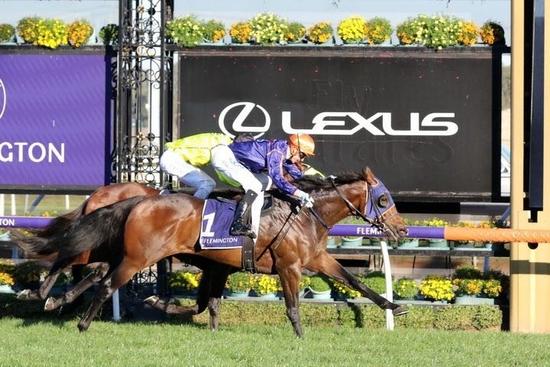 Matt Cumani is likely to take a conservative approach with rejuvenated Declares War, hinting the temptation of ­chasing Queensland Derby glory could be doused by long-term goals.

Completing an unlikely full circle with the gelding, Cumani regained the three-year-old he bought as a yearling after ­Darren Weir’s disqualification in February.

“As fate happens, he came back to us,” Cumani said, explaining there was an issue with the ownership, prompting Weir to take out 25 per cent.

“Darren used to ­always think he was stayer and I think that’s why we always had the Derby in mind,” ­Cumani said.

“I was a bit dubious after his first few starts, but that was pretty solid there today.”

When Cumani regained the horse in February, he failed to perform and was gelded.

“It’s been a bit of a slog ­really,” Cumani said. “There were a few things that weren’t quite working for him but he’s gelded and come back still a big, strong and powerful horse.

“This is probably a step down to what he was challenging for earlier in the prep so we’ve got to keep that in mind.

"He’s a horse still developing, I think. He’s getting his running style. Some of his starts pre-gelding were too bad to be true.

“We just weren’t seeing that finish so we’re assuming the gelding has done the trick.”

Superbly ridden by Jye McNeil, Declares War shouldered 60kg to victory in the Mahogany Challenge Handicap (2000m) in a timely reminder of his 2018 form.

But Cumani is urging caution about where to go next.

“We’ll have a chat to the group but I think you’ve probably got to be thinking about a break,” he said. “We’ll see about the Derby. He took his gelding a bit hard, to be honest.

“He gets a bit nervous pre-race now, which he didn’t used to do, so I feel like he’ll come back a lot better from a spell."