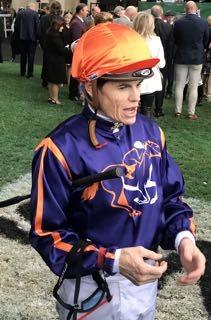 Race 8 is the Listed Sungold Milk Warrnambool Cup over 2350 metres, my ride here is DECLARES WAR who is trained by Matt Cumani.

This four-year-old gelding by Declaration Of War is raced by Domain Thoroughbreds and partners. He is lightly raced for his age having had 15 starts for a record of four wins and four placings.

I’ve only ridden him once and that was at the end of his three-year-old year in the Group 1 Queensland Derby, finishing 8.4 lengths behind Mr Quickie and Vow And Declare.

He’s had four runs this preparation and they have all been solid efforts from him and he hasn’t been beaten far. He steps up in grade today and carries the minimum weight of 56 kilos.

He should get every chance to run out the trip from a favourable barrier draw and provided he runs out the trip solidly, he can win this.